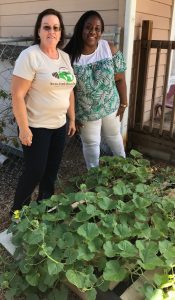 Jacquie Robertson and Nicole Beckford-Henry are showing off the cantaloupe pallets the children have helped to grow.

Planting Seeds to Help Abused Children Blossom
Martin County, FL – Jacquie Robertson loves children and gardening!  In fact, she had a 25 year professional career in landscaping and gardens, followed by 11 years teaching at Jensen Beach Elementary (JBE).  Jacquie is now retired and has expressed that she wanted to “combine my two loves and make a difference in children’s lives”.   After retiring from teaching, Jacquie continued to lead the JBE Green Team Kids Club that she originally led with her class at JBE.  After being nominated for the “Green Team Teacher of the Year” award, she got the idea to expand the club to the entire school and it grew from there.  Together, this group of dynamic volunteers decided to branch out and share their enthusiasm by mentoring local children at the Hibiscus Shelter in Jensen Beach. The Hibiscus Garden Club is led by five volunteers including Jacquie, Denise Caulkins, Jamie McNealy, Tammy Pendergast, and Susie Greenstein.  Many have attachments to these children already, since they teach, serve lunch, or volunteer at JBE.   As a former teacher, Jacquie had met several children who lived at the Hibiscus Shelter, which prompted her and the group to reach out to offer their services.  They knew this project was about much more than just planting a garden at the Shelter. They knew the children would learn valuable skills including team work, planning, organizing, responsibility, completing tasks, working outside environments, and healthy nutrition education. Some activities include learning about outside pollinators, making butterflies, bird baths, beehive crafts, and tasting the harvest of grown vegetables just to name a few that took place this summer. These tools would be important for any child to learn, but they are crucial to the well-being and growth of abused children who have not received the necessary nurturing and guidance at home.  In addition, their timing was perfect!  The Shelter is undergoing a major renovation and while the playground area is being worked on, the garden was a main focus for outdoor activities.

The Shelter Summer Garden Club Project began with eight earth boxes and some seeds.  The self-contained planter boxes and seeds were generously provided by the JBE Green Team Kids Club with soil provided by Julie Norsworthy with the PGA Village Garden Society. The children loved the idea of picking their own seeds from an array of 25 vegetables and fruits and their top selections included spinach, peppers, radishes, tomatoes and kale.  However, the volunteers were very surprised that cantaloupe was also a top choice!  Jacquie wasn’t familiar with how to grow cantaloupe, but knew it doesn’t grow well in an earth box, so she researched to find a different technique and learned to grow them in pallets.  Not only were the children learning how to grow fresh fruit and vegetables, but they were learning how to research and problem solve. Consequently, the children had a vested interest because they had personally chosen those seeds and were excited to see them grow!  Eleven cantaloupe plants are successfully blooming and the children are helping to maintain the entire garden weekly.

In addition to this wonderful garden, Jacquie and the group visited the Shelter weekly to host related projects that included making a bird feeder and reading to the children about the importance of bees, along with other fun and educational themes.  The children were delighted when guest speaker, Julie Norsworthy, a monarch butterfly “guru”, shared with the children the five stages of a butterfly life cycle and then together, released the butterflies in the final stage.

Jacquie has used her many connections to local garden clubs, nurseries, and businesses to request sponsorships and grants for continuing the Shelter garden project, as well as seeking additional opportunities for the children to learn about gardening.